From our friends in D.C.:

I was in New York last week and unexpectedly met a guy through some friends of mine. It was a Saturday night and around 9 p.m. We had to part ways because of commitments with our respective friends. At about 1:30 a.m., I got a text from him asking if I’d like to grab a drink. I figured, why not? Things were dying down with my friends and I don’t make it up to New York very often.

So we met up and had a few drinks, just the two of us. This continued for a few hours, and eventually we ended up back at his place (he has an apartment on like the 70th floor of a building), and we watched the sunrise. I know this sounds sappy but it really was romantic. And then we made out.

Then he told me that he has a girlfriend of two years and she lives halfway around the world. He said he was really into me but it’d be really mean to break up with his girlfriend, even though he admitted it’s not a good relationship, because then he’d have to do it over the phone and not in person. I really like him and would definitely date him if he were available. Do you think that’s possible? He hasn’t really made much of an effort to pursue me since that night, other than calling me the next morning to make sure I got home OK.

Oh, dear, where do I begin? See, if you were some country bumpkin from Mississippi or the like, with a bow in her hair, waiting for your Prince Charming to pick you up from the cotillon, then getting your sweet little self into this situation would be halfway understandable. After all, NYC is a big, big city filled with men with slicked-back hair and Ikea-decorated apartments on the 70th floor of nondescript buildings in Murray Hill.

These men, sadly, are players at best; date rapists at worst. No, serial killers at worst, but when’s the last time you heard of a pretty blonde girl being killed in Midtown East on CNN? So, there you have it.

And not very good players at that. See, let me explain to you how NYC hook-ups work. I say hook-ups because no one really dates here–entire lifespans of relationships are crammed into one evening, but not before, as your sweet Prince did, have a look-see around to assess if there were any better options on the table before he offered that terribly romantic booty call at 1:30 a.m. No, wait, it wasn’t even a call, it was a TEXT! Even worse.

See, how you can possibly think that after a brief flirtatious meeting in a NYC bar, a late-night text to hang, more alcohol, more alcohol, trip to a douchey apartment (and yes, I’m betting it was pretty douchey, white walls all around? Doorman? Leather sofa? Dirty sheets? Beard hairs all over the sink, next to the Armani cologne? I can already picture it in my mind.

But I digress. Then the real kicker comes to avoid this man at all costs when he reveals that he has a girlfriend who lives overseas, but he’s not really into her, but he could be really into you, but he can’t be into you because it would be so mean to break up with her like that. You know. Over the phone. If you honestly believe this story, then I have a nice piece of vacation real estate to sell you in El Velador, Mexico. It’s beachish/oceanish access, too. Seriously.

This ginormous red flag should’ve tipped you off on two things: This guy is a tremendous dirtbag, but even worse, this guy is a tremendous pussy. You do not want a guy like this. This is the kind of guy who will book you a Sandals resort vacation, then spends half of it hitting on the waitstaff, thinking it’s OK to ogle these woman and lightly slap their bottoms, because, well it’s “harmless little fun” and he thinks he’s entitled to it. Do you really want to date that guy? I thought not.

Oh, and here’s another tip that he’s just not that into you (hate to use that phrase but there you go, it’s pretty accurate): He hasn’t attempted to make any contact with you since you left town. As a wise friend once told my ignorant 23-year-old ass, “If a guy likes you, you will know. They don’t really mess around with mixed signals when they do.”

And that is pretty much how hook-ups in NYC work. Once the hooking up is done, it’s done. Outta sight, outta mind. And onto the next semi-liquored sorority girl off the bus at some horrible Midtown club next weekend.

I live in a pretty international city and am a single woman in her early 30s. I’ve been having trouble finding the right guy. My only requirements are that he be six-feet tall or taller (I could probably deal with 5’10”), liberal, of mixed nationality (purely American guys are boring) and speak at least two languages. I’ve tried online dating but without much success. Any suggestions?

Oh, Christ, where do I start with you? I bet you are just a stellar example of womanhood, aren’t you? Like a shining pillar of exemplary femininity in your sky-high platform heels, expecting and wanting to have it all, like a Kelly Ripa, Real Housewife, Sarah Palin or any other woman who makes all other women look bad?

If I were a man and read your checklist, I would be completely offended at how shallow you are and your mind-blowingly stupid requirements. And even if the love of your dreams possessed all these qualities you’ve ticked off, I bet he would want nothing to do with you, because, well, he probably has his shit together and would want to spend time with someone who likes him for him, and not his CV.

Here’s what: The more you have on your stupid checklist, the more you automatically discount eligible, probably pretty fantastic potential mates who may not have all these qualities, but have some pretty spectacular other ones you never thought of…Like say, being nice? Being generous and kind to others? Being open-minded? Being intellectually curious? Being a good listener? That short guy who cooks like Thomas Keller and is as funny as Andy Samberg?

See, all those things are much, much, much more important than that bullshit you just threw down.

And, as a result, you are automatically closing yourself off to these people. What they can teach you. New experiences. And potentially a really kickass boyfriend you couldn’t have imagined. Like anything else in life, it is extraordinarily important to be open-minded about meeting new people. You will never know who you are ultimately attracted to unless you give them a chance.

Also, I hate to point this out, but being a successful, educated, single woman in your 30s isn’t the Ace in hand you think it is…NYC, D.C. and those East Coast cities are crawling with women just like you. Do you think you’re that special? Because, really, you are not.

Tone down your stupid checklist, hell eliminate it altogether, and you will meet someone of substance. But if you insist on keeping this shallow list–and yes, it is shallow, even if you think requesting someone of mixed ethnicity or multiple languages is not. It is.–you will be alone for a very, very, very, very long time.

P.S. On a side note, I am DYING for that new show on Bravo, Miss Advised, about those three headcases trying to give dating advice in NYC, LA and San Fran. Only the San Fran one seems half sane. And for fuck’s sake, what hole did that idiot Julia Allison crawl out of? For the sake of all mankind, put her back! 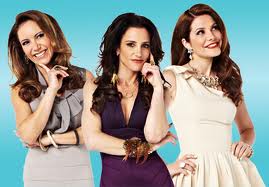