Did you know there’s a football game this weekend?

The other day, when I pulled up my head and asked, “Hey, just who is in the Super Bowl anyway?” I got nothing but dead silence from my co-workers. Not from shock that I didn’t know. It’s just that none of them give a shit about the Super Bowl either.

I really dislike football. Period. Always have. I think it is excruciatingly boring to watch. And I can’t follow the rules for shit, nor do I care to learn. Any sport that was hands off for the chicks in high school was dead to me. I couldn’t tell you the difference between a first or second down. Or what “off sides” means. Or why roided up giants tend to be the most violent dudes on campus. The excitement/slash/support-the-team mentality that was forced upon us in high school marching band–especially those 7 a.m. in the fucking freezing cold rehearsals–didn’t help either. 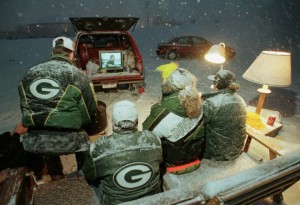 I mean, it is Green Bay. I suppose there's nothing else to do there.

After a drunk kid threw up next to us at the very beginning of a Big Ten game when my parents were visiting, and we had to sit over that vile pile of puke in the stands, I vowed never to attend another football event again.

However, that “Friday Night Lights” program was pretty fucking good. I think it had something to do with that hot blonde kid who plays action heroes now. 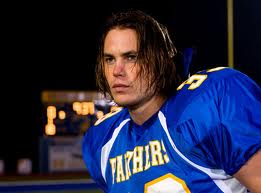 And, due to some stupid anti-gay remarks from the 49ers Chris Culliver, may I just say, dude, you are playing for the fucking San Francisco 49ers. Get with the program! Oh, and if someone has to win this thing, go Ravens.

Here are a few other socially accepted and celebrated things I can’t fucking stand:

1. Holidays. Nothing gets me more irritated than forced emotion and socializing. And the holidays are primed and ripe to make you feel nothing less than an inferior, socially inept human being who has failed your parents and/or children. Now that the consumerist nightmare called Christmas is over, Hallmark, Zales and the Cheesecake Factory are chomping at the bits to sink their fangs into you for the worst one yet–Valentine’s Day. That’s right, fellas, get those orders into 1-800 Flowers now lest you be shut off from the vag until Easter.

The only holidays that are acceptable are the ones that allow for spending time outdoors and eating things with your hands–Memorial Day, Fourth of July, Labor Day and so forth–with no forced gift-giving or spending time with the in-laws. You don’t need to suffer through church, or a pageant about Baby Jeebus, or make any trips to Target and get trapped in the parking garage for an hour. And that is just winning, Charlie Sheen style.

2. Live Concerts. Holy, shit, did you know Rihanna is coming to town? No, no I didn’t. Nor am I going to spend over $100 to buy her tickets that support her dumbass lifestyle. Are you a plus-40-year-old human being who gets excited when the Stones announce another tour, and pour your muffin top into your hot pants and too-tight T-shirt you bought during the “Bridges to Babylon” tour, just to get too drunk in the pre-concert tailgating party only to be puking your guts out during “Tumbling Dice”? Did you know that live, mega-concerts that cost more than $100 are the ultimate fleecing of the music fan? Now, you know.

Did you know Beyonce is in the Super Bowl? Did you know that soda and major athletic sponsors, like Coke and Pepsi, contribute to the obesity epidemic and childhood diabetes?

3. Chocolate. We get it. Chocolate’s great. It’s fucking tasty as hell. But it’s not on par with a) winning the Powerball, b) sex with a vampire or c) sitting outside and eating various things with your hands in the sun. I feel about the same way about chocolate commercials as I do about flavored vodka–and we all know how I feel about that.

4. Cheap alcohol. If you are out of college, and/or over the age of 25, the thrill of cheap alcohol–or getting a deal on a bucket of Pabst–should not be a big deal for you. You are an adult. Cheap booze doesn’t equal good booze–and probably nothing you should be putting in your body if you value your stomach lining or your rectum. The same goes for spilling a beverage or leaving a half-drunk glass on the table. It is not a big deal. As a tax-paying adult, one of the few things you are entitled to is not slamming a beverage before you leave, or having some 43-year-old jackass yell “party foul” at you.

5. In fact, getting free anything. I used to review movies–and it was awesome. The best screenings were the private press ones, where only a handful of you sat in an empty theater and got to enjoy a film in silence. The worst? When they made you attend an “open screening” that some KISS radio station gave out free promotional tickets to. Those cattle calls made my skin fucking crawl. If you are the kind of person who obsesses over getting ultimately worthless, free, tacky shit, you must stop it. Free doesn’t equate with something of value. And it certainly isn’t worth getting into a fistfight over and spilling your bucket of popcorn at a free screening of “American Pie: The Ultimate Reunion Reunion 2020.” 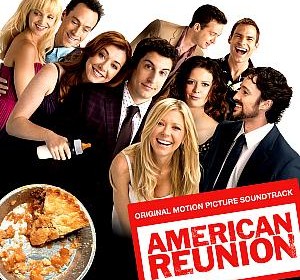 I'm quite certain that this entire franchise exists to allow those involved to pay their mortgages.