OK, so round two of my SXSW reviews needed to have some rock to it. And, as I like this theme of choosing bands based on their names only—I decided to go next with the much-hyped Surfer Blood.

Now, I like listening to music that makes me feel like I’m outdoors—or music that would potentially sound good outdoors. There’s nothing like a expansive, soaring track to kick up any stoner high to the next level. Surfer Blood showed a lot of promise in this regard. The first track—their first single and what helped create all this buzz for them—“Swim” is very, very large-sounding indeed. It just busts out with big guitars and declarative lyrics, then moves very quickly into a bigger, chant-able chorus–as Dave Grohl would tell us, all must-haves for the basic breakthrough rock song.

Then track two happens. And three. And four. And I am so fucking bored I can’t believe it.

This reminds me of why I, and most rock critics, have the three-track rule to begin with. No, we don’t have time to listen to your entire shitty CD. Basically, you get a new album from some no-name outfit and you put it on. You give the first three songs about 30 seconds or so into each to see if anything catches your attention. If they don’t manage to put anything worth a shit into the first 30 seconds on the first three songs, you hit the stop button real fast.

The problem with Surfer Blood is that they get your attention, all right. All at the beginning. Then? Nothing. And I don’t think I have to tell anyone that there’s nothing sexy about blowing your load within the first three minutes and 18 seconds.

While those morons over at Pitchfork gave Surfer Blood’s debut album, “Astro Coast” an 8.2, I recommend that you can solidly skip it. Comparisons have come rushing out to “old Weezer” and Pavement and other guitar-heavy bands from the early-to-mid ’90s that like to sing about girls and such. Well, then, go back and listen to Weezer and Pavement. None of these kids is fit to lick Stephen Malkmus’ ass.

Here are three other reasons why you should dislike this band: They’re from Florida (sorry, Florida, but really, after the 2000 election, I’ve wanted you gone for good—and I don’t think there’s anything you can do to redeem yourself); you pose in stupid pictures, like this one, with disco horse heads; and three, you need to have at least one fuckable person in your band to be successful. Sorry, them’s the breaks. 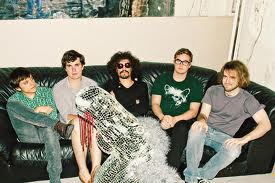 ugh. can you feel the alternative?

One Reply to “Surfer Blood: So very fucking boring (a SXSW Music Review)”