(Ed note: These arty bitches performed at SXSW 2010. My bad. But they still blow.)

So, my grad-school friend Andrew who’s currently in Beirut, mentioned that although he enjoyed the pop culture references, he was up for hearing more about music.

I used to write about music for a living—I received hundreds of albums every month; attended countless live shows with notebook and beer in hand; and weathered many a drunk-groupie bathroom line. The takeaway? I got real sick of writing about music. They say that anything that becomes your job is no longer fun. That is correct. Which makes me think that, if that’s true, then sex is no fun for a hooker. Note to self: Never become a prostitute.

Anyway, writing about music kinda sucks for a couple reasons. One, it really ruins the fun experience of going out to a show. I have stood far too many times in uncomfortable shoes, in beer-soaked venues with shitty sound systems through too many fucking encores—did I mention that I loathe encores? Play your shit, get the fuck off the stage! Making us stand there and clap like a bunch of fucking monkeys, begging for a banana—so that going to shows now feels more like a chore than anything else.

Like Paul McCartney once said when someone asked him if he went out to live shows anymore: “Why? I’ve got great records at home.” Yes, I am too old for this shit. And I don’t want to stand behind you while you frantically take fuzzy snapshots of bands on your cell phone to send to your douche-bag friend, or better yet, call your douche bag of a friend to tell him that you’re seeing Joanna Newsom and doesn’t she just fucking rock. (I also despise Joanna Newsom).

That said, SXSW is coming up. And I figured it might be fun to take out the knife and fork and tear into some of the most hyped bands coming to Austin next week. And get this…I am beholden to no one. There is no publicist to piss off, no record label to suck up to for the piddling amount of ad revenue they have left, no shitty hipster rag I gotta conform to. This is unabashedly, fuck-all what I think of these acts.

I pulled some bands off Allmusic.com’s most recommended list. Keep in mind, I’ve been out of the game for a long time, and I knew absolutely nothing about any of these bands.

I decided to start with Mountain Man. I like mountains. I like men. And if you fucking put them together, that is like crack to Tyron Biggums to me. Fucking Mountain Man? Hell, yes.

Now, I was vaguely expecting some My Morning Jacket type bunch of bearded boys ripping into it, yelping about the woods and whiskey and such. No. Here’s All Music’s bio of this band:

Vermont-based indie folk outfit Mountain Man formed in the late 2000s around the talents of Molly Erin Sarle, Alexandra Sauser-Monnig, and Amelia Randall Meath. The three women met while attending Bennington College, a small liberal arts school in the southwest corner of the state. The trio members, who harmonize so effortlessly that comparisons to the Sirens of Greek mythology are inevitable, craft largely a cappella, modern folk songs that draw heavily from the melodies and imagery of traditional American folk music. Mountain Man’s debut album, Made the Harbor, was recorded in an old ice cream parlor dating from the turn of the 20th century and was released on Partisan Records in 2010.

I don’t think a band’s bio could get anymore precious—there was nothing about this that didn’t make me want to claw my own eardrums out. And when I pulled that shit up on my computer to listen to it, well, damnit, it got way more precious. 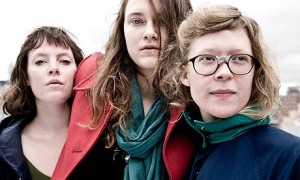 don't you just want to punch the one in glasses?

Now, I’m not arguing that these bitches can’t sing and harmonize and all that shit. They can. But you put Bennington and Sirens and ice-cream parlor into one paragraph for me, and it’s difficult to choke the vomit back. One spin through this record and even I can feel my fucking period syncing up to theirs. It’s kinda gross.

One thing I really despise is egregious displays of sensitive artistry combined with chick-dom with tender, sweet folk music. It’s just too much, like putting three tablespoons of pure white sugar into a Dunkin Donuts carmelized coffee. I don’t like it when music has no bite—of any kind. Plenty of women have sung about the mountain and/or hillbilly life—Dolly, Loretta, June Carter—but those women have chutzpah, spunk, bite.

I also find it really condescending when artists adopt a sound that comes from a lifestyle completely outside their realm, i.e. Bennington kids don’t know what the fuck mountain/hillbilly life is about—knitting scarves and tapping your own maple syrup doesn’t count.

Now, the folks say this would be real nice to listen to around a porch—imagine a nice little singalong with only a few voices and instruments on a June summer’s night, outdoors at dusk. And, while it does remind me a bit of the O Brother, Where Art Thou soundtrack, it’s no comparison to the real deal, say, go back and dig through recordings from earlier hill eras. Also, the Fleet Foxes are big fans, and they’re about the most boring bunch of pussies to come out of Seattle since Candlebox. I say, if I find myself on a porch with these three, please kill me.

Any other artists you want me to sink my teeth into? Please write. I’ll be here all week.

One Reply to “Overhyped, Unplugged and Barely Tolerable (A SXSW Music Review)”