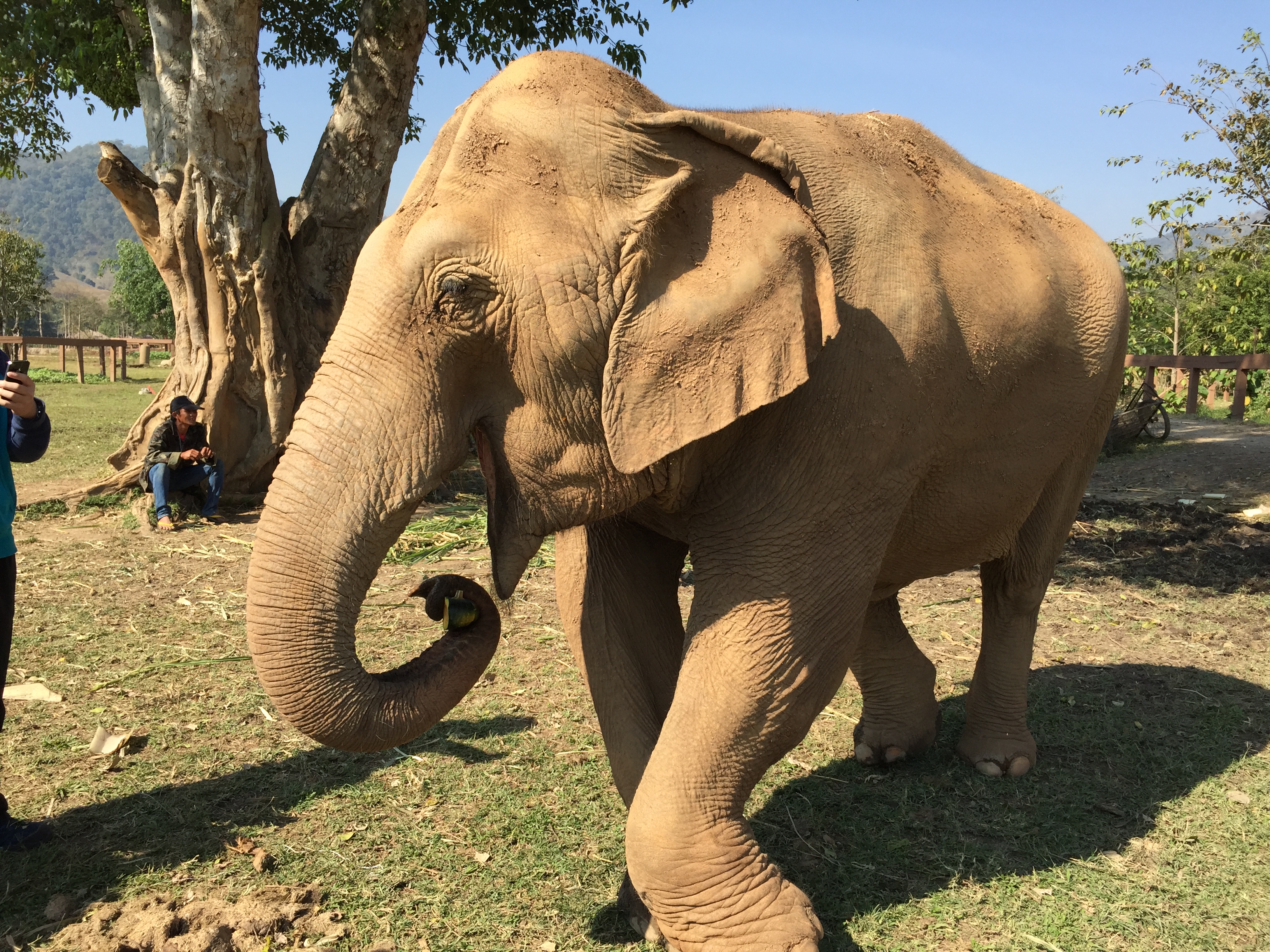 Meeting an elephant can be many things—daunting, thrilling, invigorating—but nothing really prepares you for that first up-close encounter. The only word that can capture that is magical.

“Welcome to Jurassic Park,” said an Australian in our group, as we gazed out on dozens of the massive creatures freely strolling the grounds. It will not be the last time the famous dinosaur park movie is referenced at this elephant rescue camp.

Elephant Nature Park is a haven for rescued animals just over 37 miles north of Thailand’s second largest city, energetic and artsy Chiang Mai. The park is home to 66 elephants that have been rescued from brutal trades, including logging in the mountains, trekking camps and circuses.

Thailand banned commercial logging in 1989, but several businesses that rely on elephant power unfortunately remain and often use abusive practices on these magnificent creatures. “Working” elephants are required to toil long hours, fed too little to maintain a healthy body weight, and many endure the aforementioned cruel physical abuse at the hands of their owners.

The park was founded by Sangduen Chailert, or “Lek,” who was born in a nearby mountain community. Lek, with her husband Adam, created the park in 1996 as a refuge for these magnificent giants, giving them a forever home. She is viewed as a pioneer in new elephant tourism.

“All it takes is one person with an idea to do something different,” said my Dutch guesthouse owner in Chiang Mai. “When she started that camp, people thought it was crazy. They were like, ‘Who is going to pay money to just see elephants doing nothing, no tricks, no performances?’ ”

It turns out a lot of people are willing to pay for that. In Thailand’s January high season, the park was absolutely filled with hundreds of guests on the viewing decks to view the elephants in a natural habitat.

The elephants are left free to roam, each in small herds or on their own. When a new elephant arrives at the park, it chooses a group, usually comprised of three to six animals, and if that pack’s leader accepts the new addition, the elephant has happily found a new family. The park is dotted with different “herds,” each with its own distinct personality—some are quiet, older animals, some packs include babies and teens that are more playful and rambunctious. 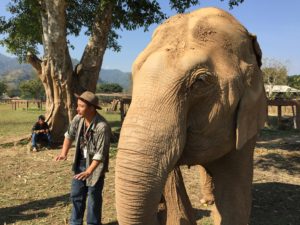 Every elephant has its own mahout, the caretakers carefully watching, feeding and communicating with their animal. It is an amazing sight to watch a mahout instruct his elephant or guide it to viewing spots, like the river to bathe, or the main guesthouse for a hand-feeding of watermelons and squash.

Given many of the animals’ heartbreaking stories, it is a great relief to not see a whip or chain in sight. As you tour the park, guides share the backstories of many of the elephants. One 70-plus-year-old matriarch has a story that is horrid but all-too-common here. Formerly in the logging trade, she had given birth high on a steep mountain and lost her baby as it fell down the hill. In mourning, she could not work, and her owner beat her and took a slingshot to her eyes, blinding her with rocks.

Yet another elephant had stepped on a landmine, devastatingly injuring her foot. Yet others have suffered broken legs and hips, or significant mental and physical abuse. A former circus elephant cannot have a photo taken because the shutter reminds her of years of abuse while performing for pictures. Yet despite these traumas, the elephants show remarkable resiliency and appear at peace, even happy.

The guest experiences involve tending to the elephants’ comfort and needs. Each animal eats about 20 hours per day, sleeping only four. It takes a significant amount of food to sustain each one, Asian elephants eating about 300 pounds of food per day. Guests hand-feed them, placing an abundance of fruit and veg in their trunks to eat, and take them to the river to throw buckets of cool water on them at bath time. 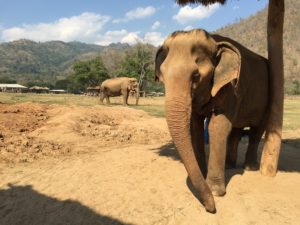 Standing next to your first elephant for a photo is a simply unforgettable experience—their sheer size, the fluidity of their movements, the way their trunk unfurls to grab a cucumber or watermelon, the thick, rough texture of their skin and the soulfulness of their eyes. Despite their massive size, elephants are superbly graceful. They don’t walk, they almost glide and are so quiet that one weighing two or three tons can sidle up right next to you without you even noticing.

On the last day, as dusk was nearing, and the elephants were leaving the mud hole, a mahout approached his elephant, talking to her for some minutes, touching his forehead to hers. Even from several feet off, you could tell the elephant completely understood, a mutual exchange of respect and adoration.

“I see them every day,” said our guide with a smile, taking in the scene. “And I never get tired of watching them.”