Recently, a friend from Vegas visited NYC and regaled me with a tale the likes of which I haven’t heard for quite a while. See, he’s a musician and was hired to play this huge birthday party that ran well into the six figures that Caesar’s was throwing for some Japanese whale. No, not the fat, blubbery kind. The obscenely rich kind.

Anyway, the dude was like two hours late to this gallant affair that Usher and the Pussycat Dolls and other such celebs-for-hire were whored out to. Why? Because he spent the earlier hours of his birthday drinking. With Paris Hilton. By the pool. The two dingbats were taking bottles of Cristal and shaking them up and poring them all over themselves and the ground. Tens of thousands of dollars of champagne. Apparently some of that made it into the whale’s mouth, cause he was too drunk to make his own party on time. (FYI, who chooses to spend their birthday with Paris Hilton?)

So, here’s my most favorite fucked-up shit of all time.

A few years ago, when I was a reporter in Vegas, I was following this high-roller group of swingers. Now, these were not your ordinary, HBO After Dark, middle-aged, saggy, hippie, Burning Man, Free Love types of swingers. 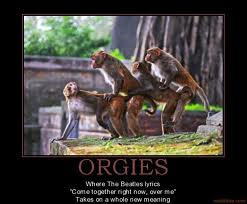 I spent about six months following the parties’ organizers. They would throw these really lavish affairs at different restaurants and casinos—with champagne and lovely food and fashion shows and the works. Then the rich people would meet other rich people at the parties and go fuck each other in their hotel suites. 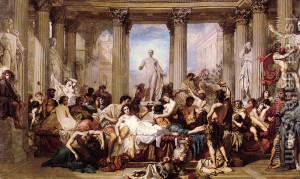 I knew that my little story on the swingers would not be complete until I witnessed one of these after-hours parties. It took some convincing and some time, but I finally got my shot.

In late July, there’s a main swingers convention in Vegas, and the high rollers were there to “recruit” or be on the lookout for other attractive, wealthy folks to fuck. After a few hours at the Tropicana’s swing-trash fest, the lady, let’s call her Jess, who I’d been following, turns to me and says, “You should come to the party tonight.”

Her husband looks at her like she’s crazy. Let a reporter into an after-party? “Um, I don’t think that’s a good idea.”

Jess was pretty adamant I go. “Oh, no, it’ll be totally fine.”

And so, we left the Tropicana, which is a pretty sleazy hotel and headed to Caesars, where some so-called rich dude was throwing an after-party en suite. Imagine this: five people wedged into an Audi sportscar with an almost nonexistent back seat, two chicks crammed in the back, changing into their Swinger Wear—which was basically nonexistent lingerie—thongs, bras, garters and such. 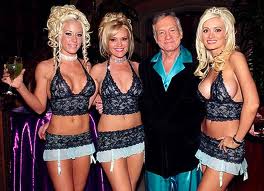 We arrive at Caesars on a Saturday night and the place is packed with gamblers—as we stroll through the main casino floor, everyone is staring at us. No wonder. These chicks are practically naked. Some guy goes, “What’s up with those people?” The dealer deadpans, “There’s a swingers’ convention in town.”

Waiting at the VIP elevators—not the regular elevators, mind you, that take regular folks up to their regular hotel rooms—the host is introduced to us. Apparently, he’s got a thing for Jess. He also looks and talks like Andy Warhol. Let’s just call him Andy for that reason.

“How’re you doing at the tables tonight?” someone asks Andy.

He’s massaging a handful of $5,000 chips in his hand, which I am pretty handily eyeballing. See, I’m pretty fucking broke. I figure, he’s drunk, he’s not paying attention, and he’s gonna drop one of those chips—which can pay my rent for six months.

Then Andy turns to Jess. “I want to fuck you.” She laughs.

So we get up to the suite. This is a suite. A couple thousand square feet. Top floor. Floor-to-ceiling windows with views of the Strip. Four bedrooms, a study, a living area, a kitchen, two bathrooms—and an open bar staffed by Mexicans. And man, those Mexicans kept their eyes glued to the ceiling the entire time. And a bouncer at the door.

Right after we walk in, this tanned, muscled-up chick comes up to Jess. I think she’s a body builder? “Hey, doll, how’re you doing?” she says, then lifts up what little skirt Jess is wearing and plants a big kiss right on her pussy. Seriously, this is her standard greeting. “Nice wax job.”

Now, I hadn’t eaten anything all night. Neither had Jess. And we figured there’d be some kind of food at this party. Nada. Nothing. However, a friend of Jess’ brings in a tray of muffins for her. “Very special muffins.” Starving, I scarf down two of them. I think you know where we’re headed here.

Things get off to a fairly slow start, but then people start getting real friendly. One minute you’re unknowingly scarfing down a pot muffin, the next, there’s an oiled-up threeway, like three greased pigs rolling around, on the leather sofa right next to you.

Jess and her husband swing exclusively with this other couple, let’s just call him Dr. San Fran and his wife, some biochemist. Dr. San Fran is hotter than shit, and I know that he’s considered somewhat of a boyfriend to Jess. So Dr. San Fran comes up to me and starts hitting on me. Now, I hadn’t participated, nor planned on participating, in any of these shenanigans, but sometimes when a hot, shirtless doctor comes up to you in a Hotel Suite at Caesars Palace and wants to kiss you in front of his girlfriend, well, you just gotta let him.

The night quickly becomes blurry—thanks pot muffins! Open bar!—and folks are really splintering off to get down to business. I realize at one point that everyone is off fucking or something, and I am sitting all alone on the couch. So, I decided to take a walk. And see what I can lift in the process. As I wander around the suite, picking up cigarettes, lighters, and Aveda body products courtesy of Caesars hospitality, I peak into the bedrooms. And let me tell you, watching swarthy, tanned, bored rich people fuck is … boring.

We all look at each other, shrug, “Why not?” and follow her into the bedroom.

All told, you can only watch people fuck each other for so long. I wanted to go home. I was lying in the living room on some chaise lounge, drinking champagne, watching the sun come up–the best part of the night, really–when some trashy-looking chick climbs on top of me and starts licking me. While the guy she came to the party with is intently watching us from some chair.

“Of course you’re not, Reporter!” she spats at me.

“Who else would come to this party dressed like this?” she says, indicating that, unlike every other woman there, I am still clothed.

She gets off me. I finally find Jess and am like, “Get me the fuck out of here.”

While waiting for my party to get rounded up, the chick’s husband comes up to me. “So, what are you going to write about this?”

“I don’t know, just what it is,” I say, crushing out a cigarette.

“Well,” he says, getting real menacing-like. “I hope you treat it right.”

“Are you threatening me?”

He doesn’t answer. My posse finally rolls up, and we pile into the Audi. Dr. San Fran is driving me home, I am crammed in the middle of the two front-seats—no seat-belt, of course—when some drunk driver, swear to God, swerves at us on Sunset Blvd. south of the Strip. I can imagine the Clark Co. coroner telling my parents how I died, “Well, she was in an Audi with a bunch of swingers at 7 a.m. with no bra on.”

And that is some fucked-up shit. 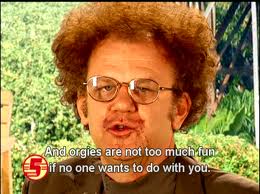