I don’t need to go on huge diatribes all the time. Once in a while, I want to post just some brief, tasteless thoughts. This continuing series will be called ‘Mer-Kuh: WTF? from now on.

Today, we will focus on that trainwreck of a human being, Herman Cain. I can’t believe this guy is still around–he’s like the kid caught with the cookie dough all over his face in the kitchen at 2 a.m. who’s like, “What cookie dough?” 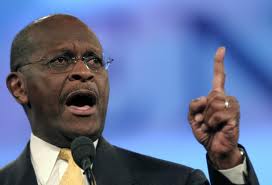 'If you come back to my campaign bus, I'll show you what this finger can do.'

I, for one, have had enough of “Sticky Fingers” Cain and his antics. I don’t even know where to begin, so let’s begin with this:

I think the number of women who claim to have been harassed or boned by Cain is up to five. According to the New York Times, the latest is a 13-year affair. Note to Cain: 13 years. Dude, why? Maintaining long-term partners defeats the purpose of having an affair to me, which is all about The Strange.

Anyway, the Times Go-To Republican on the matter is none other than my home state’s idiot governor, Terry Braindead. Really, Times? No one else picked up their phone? I don’t care if Iowa does its thing first, do we really care what this guy thinks?

Moving on, why anyone would vote for someone who ran such a substandard, disgusting pizza franchise for a decade is beyond me. I’m in the camp of I Don’t Care Who You Do, but you better have done something cool with your life before you run for the big gig of running the free world.