It’s Jan. 2. Have you scraped your hangover off yet? No? Good, let’s get started.

This is it*. The year before the end of the world on Dec. 21. Or just a major shift in universal powers that be—or, What Will Oprah Do Next?

A friend G-chatted me the other day: “What a change for you from last year… no ‘he’s really smart, I want to go home with him…,’ yelling at Eurotrash, etc.” Yes, dear reader, last New Year’s Eve was my third and final breakdown over the course of two months in New York City, the first of which started with Halloween and a very intense fight with a cab driver over whether he could have me arrested or not.

I spent this year’s NY’s Eve on a road trip to Elma, Wash., to buy a rebuilt motor for a Datsun. We ate delicious cheeseburgers and milk shakes bought from a roadside stand, then casually hung out with some fine Templeton Rye whiskey (Iowa made!) until I made it until, oh, all of around 11 p.m. I can barely stay awake past 10:30 anymore. I like to still blame the Mono, but really I just like sleeping a lot.

This suits me just fine.

I haven’t given you a recap of my year, so here goes the abbreviated version. Like that SOB Kim Jong Il, let’s put 2011 to rest:

• January: Sucked. Cold. Did a lot of sobering soul-searching.

• February: Went to Nicaragua. Introduced to Sponch. Learned best saying every, “Thank you for you.”

• March: Nothing happened this month.

• June: More move shit…Go to beach houses a few times. Realize that this is probably only one of two things I will miss about East Coast, the other being people. Something about summer demands feeling hot by an ocean or bay in a bikini, drinking margaritas and listening to stories of how hot MILFs in the Hamptons try to hit on pool boys…

• July: Fly to Seattle to look for place to live. Have mini-breakdown on first day. Then buck up and find space. Fly back…Spend rest of month suffering through record, sweltering heat but enjoy last few stellar hockey games with Mega Touch and score a goal during my last game. Spend week at beach house, working in my swimsuit. Do not miss city.

• August: Fly to Seattle for reals! Sit in empty apartment for a few days, but like a woman possessed to make it, I have a very aggressive list of Doing Shit and proceed to Get Shit Done. Apartment is furnished, several Meet-Up groups are joined, Mt. Rainier hiking excursion completed, searching and finding of a bicycle is also finished.

• September: Days are gorgeous. Work early, get done early, go outside hiking or biking for three hours or more every day. New apartment is great—no noisy neighbors. “Like being on vacation…” I tell a friend. Begin and conclude dating: Meet the Man**. Could not have created a better one—smart, funny, creative, fixes and makes shit with his hands. Has the cutest fucking dog on Earth, too, so it’s like I got a two-for-one: Man + Dog. 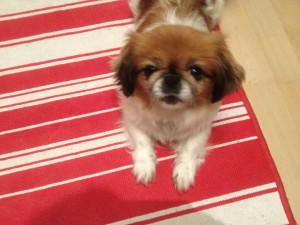 • October: Good times are continued…Having fun biking around town, eating at new restaurants (food is awesome and fresh here), among other activities. Slammed by Mono at End of Month.

• December: Finally over the Mono, but getting caught up on other stuff that was put aside in November. Also, go home to Iowa to see family. Get ready for New Year and new goals: Write more and pay more attention to this here blog; get some bigger project(s) off the ground; spend more time outdoors; learn how to scuba dive; go to Alaska; find a house. Realize that I haven’t seen a rat since I left NYC and how much it fucked with my psyche. Sigh. Relax. Realize that I am happy.

*I don’t believe this is really it, much like the aforementioned Rapture. For the sake of this entire blog, however, let’s pretend that it is.

** I haven’t mentioned much about him, because despite the over-sharey nature of this here blog, that is something I prefer to keep fairly private and respectful. But here are three things I learned during my short-term dating life in Seattle: No. 1: Ladies of the East Coast, men are plentiful, educated, nice and considerate for the most part here—they will take you out for a proper date, talk to you like a person (not a one-night conquest) and then ask you out properly for another… No. 2: Did I mention they’re hot? No. 3: Oh, fuck it. See No. 1. I was man-less in NYC for six years. I met my man in six weeks here.