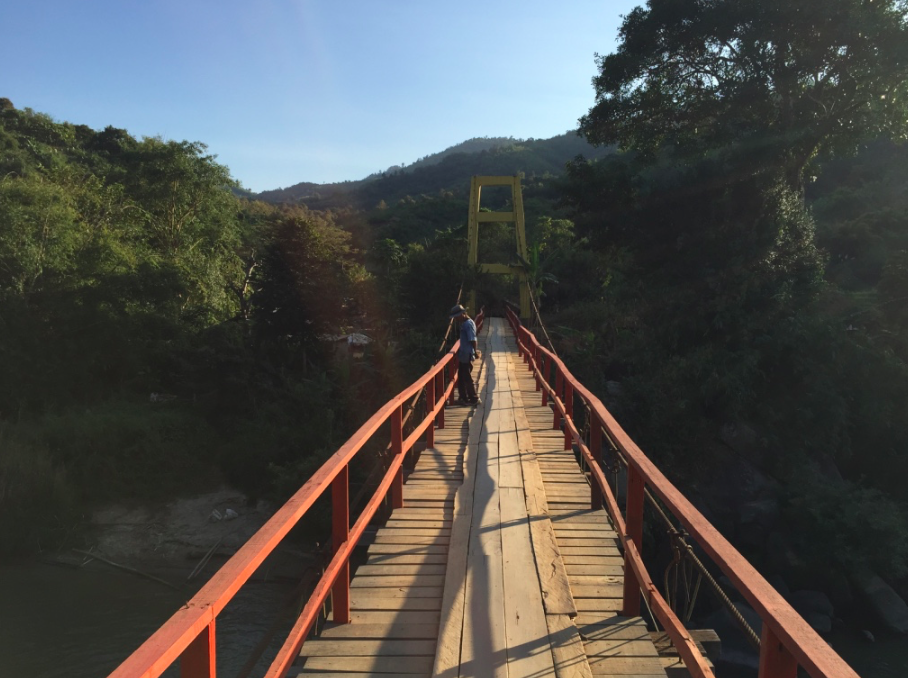 When you travel you will meet many people, but there will only be a small handful who stick in your mind as remarkable. On my trip throughout Southeast Asia I met two such people: Here is the story of the first.

“What should I do next?” I asked my Airbnb host in Chiang Mai, Thailand. Of course, I had the guidebooks and the internets and my friends’ recommendations, yet what they were all telling me to do next didn’t really jive with what I wanted to do. After the chaos of Bangkok and the still very-white-European experience of wandering around Chiang Mai for days, I was really jones-ing to get away from coffeeshops and dreadlocked Germans.

“Let me rephrase that,” I said. “What would you do if you had a few days off?”

When you travel, of course, you do all the tourist-y stuff. I mean what would be a trip to Seattle without seeing the Space Needle, or NYC without a visit to the Statue of Liberty, or not seeing the Eiffel Tower in Paris? Honestly, I don’t really care for that stuff.

I was only Week Two into my big Southeast Asia trip and if I had to take my shoes off and go through yet another temple to look at more gold Buddhas, I was going to go mental.

My Airbnb host looked at me, sizing me up to see if I’d really dig the local stuff. Then he said, “There are two places not too far from here up in the mountains. This one has really cute little huts, and still has some Wi-Fi and massages and stuff like that if you don’t totally want to go off the grid,” he said, pulling it up on his laptop.

“But this other one is really remote. I’ve never been, but I’ve heard it’s incredible. I’ve had families go up, and the kids come back and they were like, ‘It’s boring! I hated it.’ But their parents love it cause there’s nothing up there but the bamboo huts and the woods.”

No sticky, sugary treats? No big-screen TVs? No video games, or internet, or shiny things, or overpriced plastic shit to buy? Done and done.

The place, Bamboo Nest, is about 23 kilometers north of Chiang Rai, which turned out to be a very bumpy four- to five-hour, nausea-inducing bus ride from Chiang Mai.

“Bamboo Nest , we offer without electricity, fan or air-condition only breath fresh , cool mountain air, live with nature , relax without pressure to buy things you don’t want.
We provide light at nighttime by solar power” 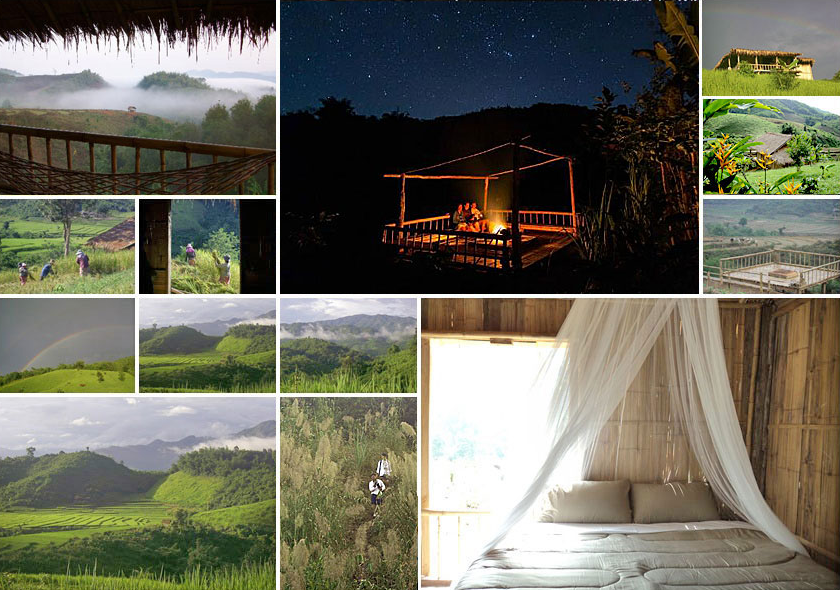 Once I got off the bus and was waiting for someone to pick me up, I found a few other passengers who were clearly waiting, too, including a nice couple from the UK about to embark on a bike tour through Laos, a single woman traveler from Australia, and two charming young couples from Denmark and Croatia.

The place is owned and operated by a pair, Nok and Noi. When the woman Nok rolled up in her pickup to load our bags, then a different open-air truck came to retrieve us, and we started ascending super-steep, bumpier, smaller dirt roads that turned into even smaller, bumpier dirt roads, I was pretty much in heaven. The final road to the camp was so steep that we had to get off the truck and hike up about a half mile.

The road from the village to the camp.

Once we got up there, the man Noi, started grabbing our bags and showing us our cabins, little bamboo hits in the hills. I found mine and just left my rollaway outside the door while I went in and started poking around and opening the windows.

Noi came up to the window and was like, “Here, let me get you your bag,” and started to put it through the window. Then, he picked up some stray dead bamboo leaves off the pristine garden outside the window, muttering to himself, “So much to clean up, so much to do!” and wandered off. 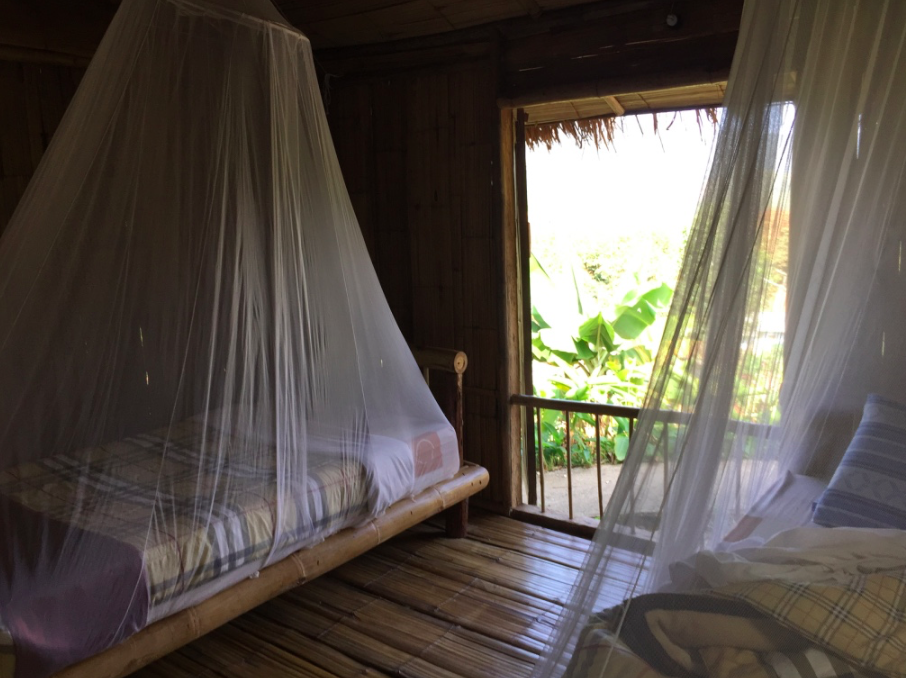 This was my room. 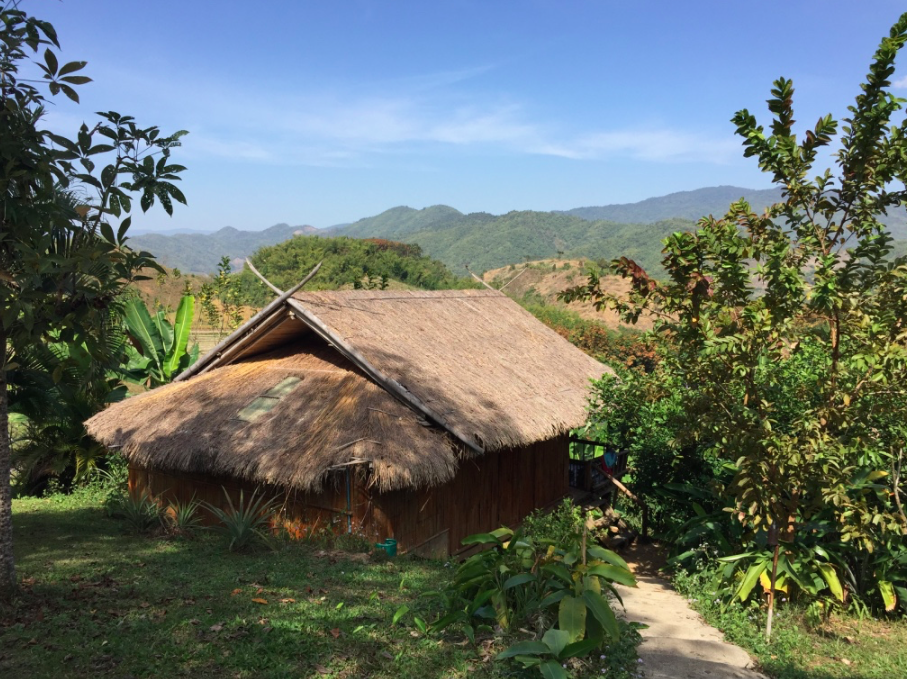 This was my hut.

I was thinking, what a curious little man.

The next day, I signed up for a “jungle tour and lunch then river cruise” along with a few of the other people. I figured we’d walk thru the woods and then stop at a local village for lunch, as did everyone else. That was not the case at all.

Noi, who was pretty much the one-man show of the camp, doing all the construction (I saw him with two huge logs on his shoulders, powering up the bumpy road driving his motorbike with one hand), grounds work, and now hospitality, started leading us up a crazy steep path into the jungle.

“Are there poisonous snakes here?” asked the Danish girl.

So was Noi’s humor, taking us through the jungle.

After about an hour and a half of steep hiking, we stopped in a clearing in the path. And he goes, “Ok, now we have lunch.”

We look around at each other. Huh?

“This is my second kitchen,” he says.

Then we see where he’s going with this. He takes his machete and starts hacking away at dried, dead bamboo and builds a fire. He then takes huge bamboo leaves to cover what now appears to be ramshackle table made out of dried sticks. He bounds off into the woods, “Now I go get some frogs for lunch,” he says, leaving us there.

“You don’t really think he’s going to get frogs, do you?” said the woman from the UK, laughing.

“Don’t know. Seems anything is possible at this point,” said her husband.

Noi comes bounding back with some huge bamboo shoots. He then starts hacking those up into tubes, and unloads his backpack, which we know see is filled with baggies of egg, rice, chicken and coconut water.

“Ok,” he says. “Now you help make lunch.” He shows us how to tamp down food into the bamboo shoots, filling it with coconut water a little at a time, filling each with egg and rice. Then we stack them over the fire. Next up is spearing the chicken and placing that over the fire.

Noi making a fire in his jungle kitchen. 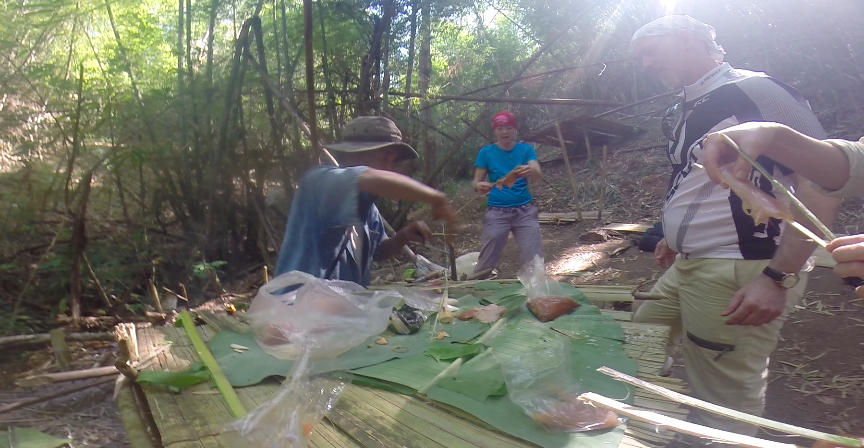 Noi showing us how to put food in bamboo to cook it.

We eat our meal with our hands right off the prep table. Best tasting chicken, rice and egg I’ve ever tasted.

While Noi is constantly hopping around, hacking at bamboo with a machete, this 90-pound man is chain-smoking cigarettes, and telling us tales about how the locals believe in “black magic,” so if they get injured or “bit by cobra” they drink some potion from a local medicine man, and just pray and do the “black magic” to save themselves.

We don’t know how much he’s putting on a show or not, but he’s a pretty amusing storyteller. But he also tells us that we don’t see any animals in the jungle because the local people have pretty much eaten them all because they are starving, a very sobering thought indeed.

When the food is cooked, we peel the bamboo shoots just like a banana to reveal cooked eggs and rice, which we stand around the table and eat with our hands. For dessert, he pulls out tiny pineapples and chops them up. It is one of the most delicious meals I have ever had in my life.

Later that day, after we discover that Noi himself is a vegetarian — he goes through the woods, plucking plants from the ground and eating them “Oh, this one is good,” he says, like a Thai version of “Survivor Man” — he takes us through local villages with starving dogs, buying a few buns to feed them, spreading a little peace and goodwill everywhere we go from village to village.

At the end of the day, we get picked up by the truck, and there is not enough room for everyone in the front. A former farm kid, I’m more than happy to sit in the back with Noi.

“Where are you from in America?” he asked me.

“Seattle…Boeing!” he says, very excited. “What was flying here like?”

“Well, it’s very long, like 14 hours, and they serve you a couple meals and you sleep and watch movies…” I watch his eyes widening. “Have you never flown before?”

So, I try to explain more about what I know about airplanes, which is not a lot at all, in the back of that truck climbing up the mountains of Thailand, and I realize that this incredibly handy man, who engineers buildings and kitchens in the jungle out of next to nothing would probably have made a damn great airplane engineer at Boeing.

“Where would you go if you could fly anywhere?” I ask Noi.

“I want to see the animals,” he said.

A few days later, as I was packed up and ready to depart back to the Chiang Rai airport, Noi and I had a smoke, a moment and look, and he was like, “You please make sure to come back now.”

I didn’t meet many other Americans on my travels throughout Southeast Asia or Indonesia. One, it’s dang far away. Two, we just don’t get enough vacation time to make that journey work. Three, I believe that, here in the U.S., we tend to be raised without the natural curiosity and openness to experience other cultures, in fact, we are taught the opposite — to fear and distrust “the other.”

If you do not travel or even open your mind and heart to “the others,” you deprive yourself the priceless experience of meeting and connecting with other people around the world who have much to teach you. I did not always understand their viewpoints, or even agree with everyone I met or sat down with, but I think about each and every one of the people who helped ferry me safely along my journey, and especially those who taught me something over a home- or jungle-cooked meal. And for this, I am thankful. 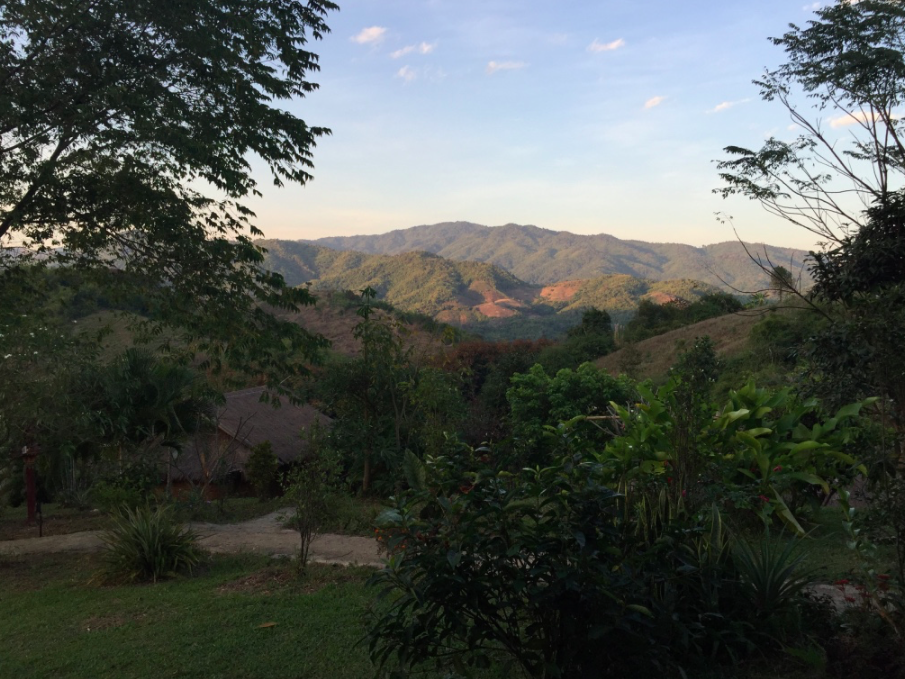 This is the view from top of hill at camp. The roof of my cabin is bottom left.

The view from my balcony. 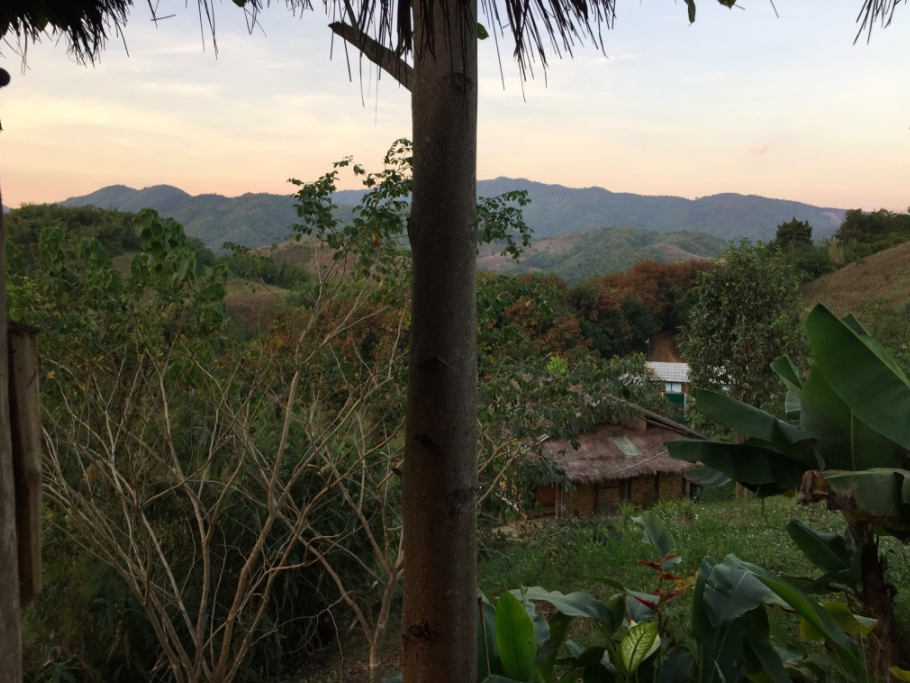 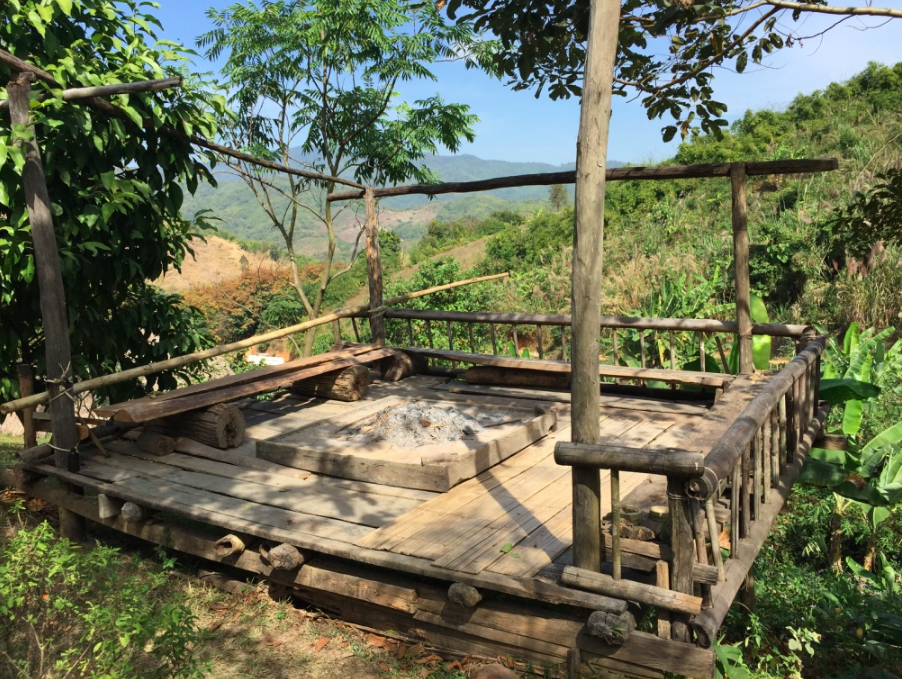 Ye old fire pit where everyone gathers after dinner to drink cold beers, smoke cigs and talk. My trip, there were people from Australia, UK, Denmark, Croatia, and Austria.