I don’t think there’s a phrase that inspires more insipid loathing in me than “buzz” band. Every year, a new crop of idiots emerges from the swamps, mean streets, Portland, etc., to become the Next Big Thing.

Being a lady of substance over style, I like to get a little more facts and information about a group before I start creaming my pants like a sophomore at the senior prom with a fake I.D. and a hotel reservation. I know there are a million variables that can go awry in between that last ironic dance to a Journey ballad and post-coital hot tub soak, so here we go:

I’ve been hearing about this Odd Future Wolf Gang Kill Them All for over a month now, since they did that Jimmy Fallon gig and every white kid wanna-be gangster gets a chance to gush on the merits of music today. While I enjoy it, hip-hop is not my bag, so take these comments with what you will.

One of the biggest—if not the biggest—buzz band at SXSW this year, OFWGKTA took the stage yesterday at MTVu’s party. Here’s what the New York Times’ Jon Pareles had to say about the experience:

But the show’s peak was the appearance by Odd Future, the teenaged hip-hop collective from Los Angeles that has stark, homemade beats and startling, gross-out rhymes and videos. A masked midget, in a Hawaiian shirt, arrived to start lip-synching “Yonkers,” followed by the group’s leader Tyler, the Creator (also masked) and characters in chicken and rooster costumes, like football-team mascots, below flashing video images of rainbows and a a lawn gnome. Eventually, after segueing into “Sandwitches” (CQ) Tyler stage-dived into the crowd. When he regained the stage, beefy people dressed in Security uniforms carried Odd Future members off the stage. It was odd enough, and it was also a little burst of energy. But it was also one more instance of outsiders’ music burnishing a corporate image–a big part of SXSW’s recent history.

And here’s the actual video, courtesy of MTV via Pitchfork.

OK, they started their gig with a midget, which I like. Tie-dye, and wildly thrown together imagery with no through-line, rhyme or reason, I don’t. This is like a bunch of hyperactive kids getting fucked up and just thinking about a bunch of random shit that they think looks good together. The lyrics feel the same way. WTF? Why do they rap about dinosaurs so much?

The leader of the group, Tyler, the Creator, does have a very interesting voice for a kid—it’s deep, and raw and gritty—for spitting out those lyrics, but most of the time, it just sounds like some bad poetry some English major/sci-fi geek has put into his journal after he’s had a few and thinks he’s creating some “art.” I’m a lyrics junkie, admittedly, many folks are not. But I get annoyed with words that have no meaning. Or filler words, filled in just cause they sound good. Again, the dinosaurs. Done with that.

Also, you guys have a bunch of mix tapes and shit, but two songs you’re cruising on now? Make some more fucking songs. 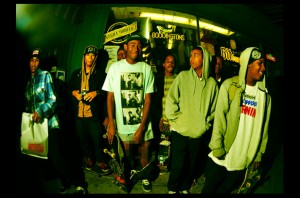 still not scary. they're actually kind of cuddly and adorable, if you will.

All this lack-of-experience, youthful hype hasn’t stopped the collective from blow-up status—they landed the cover of Billboard’s SXSW issue and have signed a record deal with Fat Possum. The intro to the BB story reads thusly: “Tyler, a skinny 19-year-old with a booming voice and a slightly gapped overbite, sits cross-legged on an unmade bed sheet in a Philadelphia hotel room. Over a tray of cinnamon sticks and a half-closed MacBook he gushes about his dreams (winning a Grammy Award) and heroes (Pharrell Williams of the Neptunes).”

Aiming to win a Grammy, which is pretty much the pinnacle of lameness in music, is a pretty bad sign. And I predict it’s probably only a year or two until these kids’ tracks are selling Fruit Roll-ups and Volkswagens. And that’s if they’re lucky. If the OFWGKTA is the future of music, the future’s already over.