When I started this site in 2009, it was a perfect storm of shit—I’d worked on a book for a couple years that was going nowhere; my dating life was a big fat zero; and I was living with roommates across from the PJs.

It got me thinking. I could fall into the 30-something chick cliché of freaking out, going on the proposed man-hunt to parlay into the dreaded am-I-planning-to-procreate-or-not countdown to 40, all the while contemplating Botox and going on more intolerable dates with dudes I’m not really attracted to just so I won’t end up a lonely 43-year-old in a fifth-floor walk-up studio…That would just be sad…

And so, berated and deflated, I decided to start a stupid blog about anything and all stupid—dubbed “2012: The Fuck-It List.” You may miss these unicorns right here. 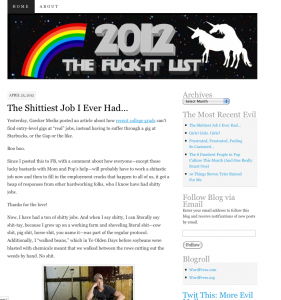 See, if you pick up any sort of media, these are the options for women over 30. To that, I said Hell to the No. There’s not much in the way for women to look forward to in life if you listen to any sort of media out there—and being a part of the media, I think there is something more interesting, less ordinary and more real to cutting your own path. It’s OK to not know what you want—it’s even better to not want what everyone says you should. And to start really examining what is important to you—and you alone.

What have I done in the past three years to thwart this typical storyline? I learned to surf and scuba. I quit smoking. I finagled it so I could move across the country and live my dream of having my own space, more freedom and spend time outdoors.

In the process of securing all this, I got happier. I got healthier. I got a hot boyfriend. With hot boyfriend, I got co-ownership of the world’s cutest dog.

I know everyone says their dog is the cutest, but this is the World’s Cutest Fucking Dog until I’m proven wrong.

And I made a shit-ton of mistakes along the way.

Since it is 2012—and according to a recent poll in New York Magazine, at least 12 percent of Americans do indeed think the world is ending this year—I figured it was time for a change if I plan to keep on keeping on writing for the other 88 percent. Getting this website facelift is like getting a new pair of running shoes—it gives me energy to put more miles on it. New stuff to look forward to…more posts, more timely stuff, and my solid, undeniable idiot advice in the new column “You’re Stupid.”

P.S. A few notes: As with most shit on the Internets, stuff gets messy. While the artwork for this brand-new spanking looking blog is all original and inspired by none of this shit, artist Alex who did my new unicorn forwarded me this pic of Obama riding similar unicorn AFTER he designed my unicorn. (Alex calls it a “happy co-inky-dink.” Since that is borderline twee, feel free to bitch-slap him the next time you see him.) 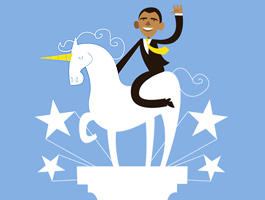 No, we did not copy this. Seriously.

The artist who designed my unicorn also brought to my attention that this is where the unicorns fucking came from. 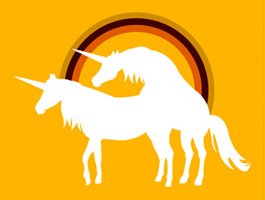 We added our own rainbow.

So, with my deepest thanks and gratitude do I give a shout-out to artist Chris Bishop, who does this awesome shit and also works for PBS Kids as a creative director, which shows that you can be slightly vulgar for adults and still do really funny, creative stuff for kids. Suck on that, GOP.

Also to artist Alex who designed my new awesome logo and Roommate Jim who designed the equally awesome-looking site. If you need any sorts of Internets work done, these are the guys to do it.