I was stuck in my career as a low-rung nothing when I decided to return to graduate school. I was working at a PR agency with a beast of a boss–we literally called her the Beast behind her back–and some spacy blonde with split ends and Chanel suits was my superior, who asked me once if I’d “seen that movie, A-Dapt-Tion? It’s really good.” 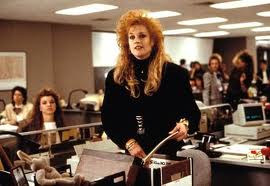 This was me. Except I didn’t have that hair. And I wasn’t a secretary. And I never got to fuck Harrison Ford.

Not just any graduate school, mind you, but probably one of the ponciest, most precious, whitest-kids-u-know grad programs in the country located outside the Northeastern corridor, where the upper-middle-overeducated-class roost in their 19th-century refurbished mansions and talk about Don DeLillo and Dave Matthews and shit like that in their Land’s End sweater sets.

Lest you think I am one of these folks, let me quickly remind you of my white-trash history filled with hanging out in trailer parks with drug runners, eating government cheese and battling rats.

Now, if you’ve ever spent a large amount of time with a bunch of overindulged, entitled brats who don’t even know who Joan Didion is, then you’ll get my point about going to grad school. I don’t want to bash it too much—I got good stuff out of it. My professors were pretty awesome, I learned a ton, managed to eek out a few decent friends from the experience, make helpful “networking” connections and become … a middle-rung sorta nobody in the Great World of New York Media. 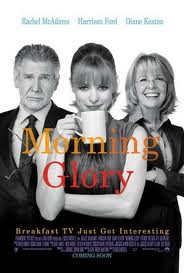 This is me now. A lowly, sprightly scrub. Oh, and I still haven’t fucked Harrison Ford.

However, at times when I get e-mails like this from the listserv, it really makes me wonder when those student loan bills come rolling in every month—I paid good money for this shit?

And so, the listserv dilemma begins, with one young lady’s query:

At issue is whether or not I should get a skirt or suit trousers (the blazer
I will be wearing is meant to be part of a pants suit). He claims that I
should wear a skirt, even though the temperatures in Chicago on Tuesday will
be in the 20s (and that’s being optimistic). However, I contend that it’s
perfectly all right for a woman to wear trousers if it’s cold outside, and
that employers would probably look askance at me if I wore a skirt during a
Chicago winter.

So, I ask my fellow alums, and told my boyfriend that I would follow the
suggestion of the majority. Hiring managers, would you hold it against me
if I wore a pants suit as opposed to a skirt suit?

Someone, a real human presumably, actually takes time out of their day to respond:

I teach a job interviewing class, and one of the tenets I share is a “when
in Rome …” type approach to attire. Think about what the interviewer would
be wearing and what your supervisor in this position would wear. In a
Chicago winter, they’re unlikely to be in a skirt. I also tell the students
that what you wear says a lot about your judgment and whether you have
common sense–in this case, a skirt might make me question your judgment!

…Are you a person who would normally wear a skirt? I would dress how you plan on dressing for work. Do what comes natural to you. For me, that is a skirt. For you, it might be pants!

… I’ve always been told to wear leather chaps and a ski mask. Specific shirt style is less important, although I’d recommend something sleeveless. If you go with sleeves make sure at least one has a pack of menthols rolled up in it. You might want to wear a santa hat for good measure. (Ed note: Actually, I kinda want to make out with this guy…)

… I have worn a pantsuit to every job interview I’ve ever been on, and I received an offer for all of them but two. I also have a visible tattoo on my wrist and a nose ring that I don’t take out. Moral? As long as it’s professional, wear whatever makes you comfortable, because your personality is what’s going to sell you, not your outfit.

And what’s the verdict? Let’s check back in with our damsel in distress, shall we?

It looks like the overwhelming majority of you say a pants suit is fine, so the Hillary Clinton look it is ;() It apparently will also be snowing on Tuesday … wearing a skirt in those conditions would probably call my sanity into question, nevermind my professional judgement … 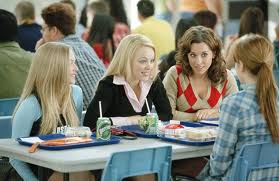 My ‘judgement’ is telling me that I really need to lose two to three pounds. My body is so not ready for the runway. (yes, I am sticking to the Rachel McAdams theme.)

I think the real issue for me is making sure the pants themselves are flattering on my not-quite-ready-for-the-runway body. Since I hate shopping for clothes, it’s always a challenge for me to know exactly what I need. The other issue, I guess, is making eye contact with the people who are talking to me, since this is something I have a very tough time with. One good thing is that I will be doing a PowerPoint presentation, which will allow me to look at the screen at least for a couple of seconds.

Thanks for the input, and I’ll let everyone know how it turned out.*

I swear, after years and years, in grad school and now in New York, listening to conversations like this—these people who don’t respect listservs for what they’re supposed to be—places for job listings and down-to-earth honest career advice that actually matters, like, oh, say feedback on a cover letter, or how to best research for an interview. I listened patiently enough to this shitheaded prattle when I was in grad school. I sure as fuck don’t want to hear it now, especially from some airhead twit who doesn’t even have the good sense to get a gmail account.

Maybe, just maybe, sometimes it’s totally appropriate to tell someone to just shut the fuck up. And risk getting banned from your alumni listserv.

*Update: “She wore the pants.”

3 Replies to “I Paid Good Money for This Shit?”