With the ‘Mad Men’ season finale looming, and the fact that I lost a lot of sleep last night thanks to Don Draper (it wasn’t as sexy as it sounds), I figure that now is the time to do a little season recap and prognosticating as to what’s in store for the folks of Sterling Cooper Draper Pryce.

Character by character, starting with the Big Guy:

I don’t think it’s possible for me to dislike Don anymore after this season. In fact, any sort of glimmer of happy-go-lucky California Don or deep soul-searching Don is pretty much out the window as far as I can tell.

First off, the philandering and general all-around treating women like shit. Before, trapped in an emotionless union with cold-as-ice Betty, I could kind of understand his cheating ways with some choice ladies—in fact, when he wasn’t cradle-robbing, Don chose some smarties—Midge (who we just learned is a heroin addict—oops, another one bites the dust) and the Jewish department store heiress were strong, self-sufficient women. But Single Don has shown us this season that he’s just as big a dick—if not a bigger dick—than he ever was before. He has unlimited freedom to act how he wants, and perhaps having the (albeit small) check of a wedding ring wasn’t such a bad thing for him. His arrogance and pussy-hounding is not only uncontrollable, but he has shred any sense of decency going about it, pounding his dick into any 19-year-old secretary school graduate he can get it into.

Don’s also shown that while he desires a smart woman who can keep step with him, ultimately his ego can’t stand it. He has to be top dog at all times, expecting his lady to do what he tells her, when he tells her. Case in point, the way he’s treated Dr. Faye this season is proof enough that he can’t handle a real woman—he orders her around, asks her for confidential info that could jeopardize her gig, fucks around on her, then gets her fired. What a guy! What’s next? You gonna give her the Herp? I just wish Dr. Faye would dump his sorry ass. Matt Weiner, make it happen. 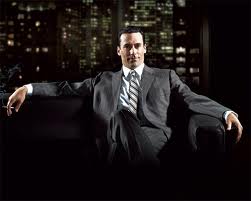 As far as his emotional development, there was a glimmer of hope midseason—Don realizes he’s drinking too much; Don starts swimming; Don starts keeping a journal, tracking his emotions—who am I? Who do I want to be? Some real soul-searching type shit is going down. But, alas, he slides back into his easy-drinking, smoking, ass-hounding arrogance. He was a man at many a crossroad, and he could’ve chosen the righteous (or at least a semi-righteous or more fulfilling) path at any moment, yet time and again, Don chooses to return his fake persona and the faux world of advertising. Living for the job ain’t no way to live, Don. No one died wishing they’d written more ad slogans for floor wax or laxatives, but maybe you’re the one horse who will prove me wrong on this.

Also next season, I want to see some bastard Don babies pop up from some of those chicks. Ah, the irony. The unwanted bastard produces… unwanted bastards! Hilarity ensues.

Oh, Peggy. You’re so sweet and such a great little lady to watch sliding into the first wave of feminism. You’re self-made, ambitious and you can get down with the gentlemen when you need to. Great strides this season for Peggy—especially her night of one-to-one hangout time with Don while he gets drunk and loses it. Peggy’s holding it together real nice this season. But there may be tragedy on her horizon as well. One, she still has a completely naïve view of what life is like for the business ladies—her invite to Dr. Faye for a drink shows that. Poor Peggy thinks that women can still have it all, and she’s going to be sorely mistaken.

On a side note, the elevator shot that ended the Miss Blankenship Death Episode was probably one of the greatest shots in the show’s history—three business women, who are at very different stages and spots in their careers, yet fully dedicating their lives to it nonetheless—get into the elevator at the end of the day, looking stoic, lonely, dead serious and scared shitless that they may end up like Blankenship—dead at her desk with the office Pete Campbell carting off their bodies. 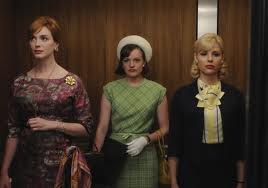 Oh, Joannie. Perhaps no one breaks our hearts more, yet can withstand having their own heart broken than you. You’re a steel magnolia, that’s for sure, but you’re mired in the old world way of doing things, whilst Peggy can still enjoy a little ladder-climbing. Despite your intelligence, uncanny knack of knowing just what everyone needs and ability to organize the shit out of anything, you’re still just the office bimbo with big boobs to most of the gents. But you’re one classy broad, and the guys you’re with can’t measure a lick up to you. Your husband, who’s probably gonna die in Vietnam, is still a rapey dickbag, and Roger Sterling really showed his true colors this season, the wimpy-ass, aging playboy who passed you over for some younger office tart and is now regretting it ‘cause you’re the only thing that makes him feel like a man. I think you’re pregnant, Joannie. I’m rooting for you, but I feel like you are a real tragic character here, and one that can’t be saved.

I actually kinda almost liked Roger this season. He was a nice lightened-up antidote to Heavy Jackass Don. In fact, Don’s behavior made Roger look like a downright saint. When Lucky Strike’s Lee Garner Jr. made you dress up like Santa and let folks sit on your lap, that was one helluva scene—you were seething, but you had to play the sad clown to keep the agency going. And then you lost the account anyway. And your book is a joke. And you knock up Joannie. And you fuck with her feelings again. Yes, you’re a Silver Fox, but let’s try to scrape up a little dignity for the next season? Don thinks he’s better than you. Why don’t you prove him wrong? 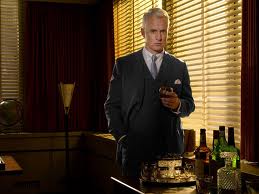 Why does Sally get her own column? She’s turning into a pretty sharp little cookie, that one. Incredibly perceptive, yet real heavy for a kid (how was that Land O’ Lakes butter girl reference for ya? The butter girl who never stops, and there’s another and there’s another…creepy.) She hates Betty, wars with her, learns how to placate her to survive—showing that she’s smarter than Mommy—but gets terrorized by her lot in life nonetheless cause she’s just a kid. I see some great things from Sally—like some slutty teen behavior, drug experimentation, acceptance to a Sister School and subsequent sexual experimentation and then some feminist-type protesting. Rock on, Little Sally. 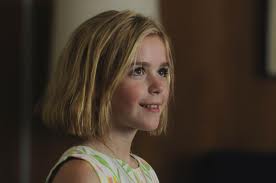 I see great things and hairy armpits in your future.

Thank God Pete didn’t rape any babysitters this season. In fact, the way Trudy let him have it last night kind of made me laugh a bit. (In real life, the actor who plays Pete looks to be a real charming good looker.) But it’s getting harder to hate on Pete. He’s still got time to turn it around.

Betty, despite getting what she wants, continues her steady slide into suburban housewife dementia, lonely and bitchy all the way, taking everyone around her down.

Bert Cooper flew the agency. Will anyone miss this guy? Nah.

The English guy, Lane Pryce. Whoa. Don got him drunk and fucking a hooker, he falls in love with a young black girl, then he gets waylaid by Daddy’s cane and scolded and told to go back to England and act like a big boy? He’s gonna have to get some balls next year.

I love Harry Crane. I just do. He’s a great lovable buffoon. Also, he delivered the best line this season, when Pete was wrangling Miss Blankenship in an afghan, he said, “My mom made that!”

Just one more episode and my Sundays can be clear for what’s really important—Kenny Powers.

I'm fucking in, you're fucking out.